Publish and Deploy Asp.Net Core Applications from Jenkins to IIS

Get the Required Tools on the CI Server

Just like with unit testing in a CI environment, you’ll need the .Net Core SDK to be available to Jenkins. It’s available at the official download site. Additionally, on the hosting server, you need the .Net Core Windows Server hosting bundle, available on the same site. See the official documentation for how to install it. You will also need to install Node.js  and npm on the server that is hosting Jenkins so you can run all the prepublish commands for an Asp.Net Core application.
To install Node.js, go to its download site and grab the latest Windows installer. When installing, make sure that Add to PATH is enabled in the install options (it is by default), so that the npm command is added to the PATH environment variable and therefore directly recognized in the command line interface.

Make sure to restart Jenkins after you've added the tools, as the PATH variable is only read at startup and not watched for changes!

Tip: It's not required to globally install node modules like bower or gulp on the build server. That should be handled by node.js’ devDependencies and proper pre- and postpublish scripts in your deployment process.

Configure Jenkins to Build the Project

In Jenkins, just create a new project and configure the source code management, for example by pulling from a Git repository. To build, publish and deploy, the following Windows batch command steps are necessary:

To make sure your pre- and postpublish scripts run, include them in your package.json (for npm) and project.json (for dotnet) files, for example like this:

This combination would effectively run the npm install and npm run prepublish commands first, then compile and publish the application via dotnet cli and finally run the dotnet-publish-iis command.

Additionally, before deploying, you might want to run a web.config transformation as described here.

Publish to IIS with Web Deploy

For the following step, you should have set up Web Deploy on both the source and target server. There’s only one more step needed, and that is calling msdeploy.exe to publish the app to IIS.
When doing that, you must supply valid credentials for the user that has publishing rights in IIS. Since it’s never a good idea to include plain text user credentials in a script or build step, you have to save them manually to the Windows credentials store. For that, log into your CI server with the user account for Jenkins, open a command prompt and execute the following command:

The authType=’Basic’ parameter is not strictly required. If your happen to be in an Active Directory domain, you could also use Windows Authentication and completely omit any credentials in the Web Deploy process.
The verb=dump will result in msdeploy listing you the contents of the remote location (upon successful authorization), so you know you've got it right when you see that. (or see no error messages, since we haven’t yet deployed any files=)
As per the msdeploy documentation, the credentials will be stored even if the response is a 401 – Unauthorized, so keep that in mind if you're just testing stuff. Also, the path to the msdeploy.exe may vary on your installation if you chose not to install it in the default location.

Now that we've stored the credentials we can finally approach the last line of commands we’re going to need for the Jenkins job:

If you want to dig further into msdeploy, these three links from the technet contain a lot of info:

Here’s a screenshot of all three required build steps: 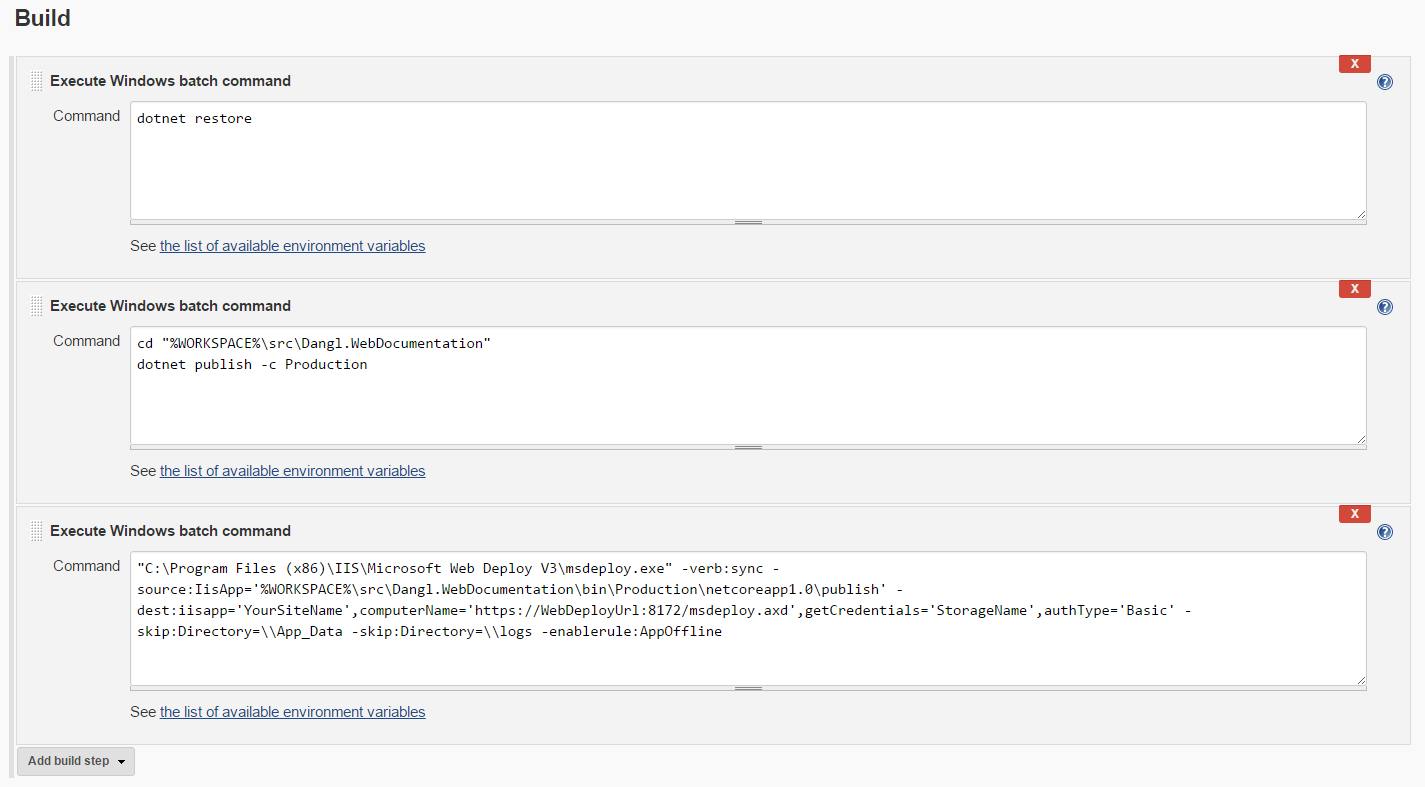 Now you should be able to click on “Build now” and let the magic happen, continuous deployment for your .Net Core website. Have fun!

Next: NetCoreHeroes: Angular 2 with .Net Core in Visual Studio 2015, Part I
Previous: Install and Configure Web Deploy for an IIS Installation